The Story of Sam aka Samantha

And what a tail tale I have to share with you all!! Remember I mentioned the park colony cat Mom L and her pals have been trying to trap? Sick and injured??

Well today if you will spare the time to read my very long post about “his” capture, you truly won’t be disappointed!

This tale is told by a marvelous volunteer with my Project Delta View Cats effort. We manage a cat colony at a city park in our little city on the magnificent California Delta.

This story is being told in the words of our park colony manager and feeder, Miss Jane.

Sam the Cat has been caught, having been enveloped in love by Angela, the keeper of the sacred net. He was plopped from net into Linda’s carrier, and as she closed the lid, Sam barely put up any argument. He is a sweetheart kitty. He is being lovingly monitored and stowed away overnight at Linda’s and tomorrow he’s off down the yellow brick road to see the doctor whom we hope is a wizard that can give him the gift of health! He will need our loving thoughts tonight and tomorrow.

What an ending, right???

Now, let’s back up just a bit for some of the background story in Miss Jane’s own words:

“He had blood on his fur from the wound on his neck and pus filling his eyes and overflowing onto his fur.

Over the next few days, he had cleaned off the blood but the neck wound was rapidly losing fur as it blew up into a swollen bump the diameter of a tennis ball. We had all tried catching him at Feeder #3 with no luck. So I went about my usual feeding pattern at Feeder #4, but this time I sat down on the ground next to the feeder. I put out wet food (enough to fill the tummies of all the cats—(about 13, as I recall).

I used a couple large flat pans on the ground next to the feeder and a few individual little dishes for the likes of Garfield and Opal (our senior and very shy cats). There was no attempt to catch Sam who, as previously mentioned, likes to eat on the other side of the hill. The next day it was rinse and repeat with Angela there, a gracious lady who offered to help us net him. I may have the exact timing of things off a little because it’s become a bit of a blur as we were all so tired at this point. Three weeks trying to catch a kitty who didn’t realize we were going to help him. 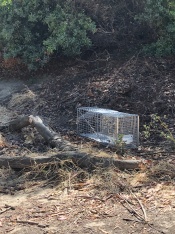 Every single time Angela, keeper of the sacred net, moved even a foot, Sam would bolt. It was at that point that we knew if we couldn’t catch him at the very least, we needed to get some medicine in him.. Linda had some leftover chilled antibiotics, so the next day we put out some salmon pate with the medicine in it.

In the past I had gotten Sam to eat at the base of Feeder #3 while I sat next to him. And there are fewer cats that eat there.

This time I showed him the dish, put it down and moved away. He gobbled up the whole thing in a snap. The next day we did the same thing and he ate the purposely small amount of medicine-laced food. What was fascinating was how quickly the swollen area on his neck had gone down, although he still had a five-inch patch of furless skin. 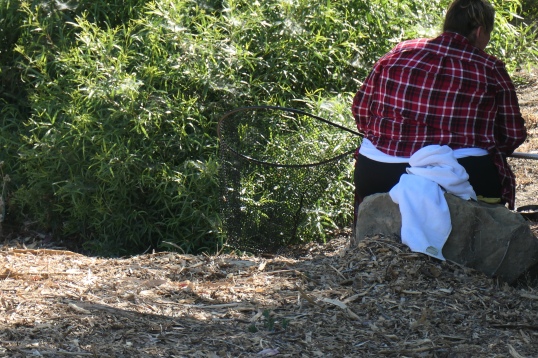 I knew from previous times he would come back for more food, so I carried a new dish forward to the right side of Feeder 3. Angela was right behind me with her net. Sam was on the hill watching us. 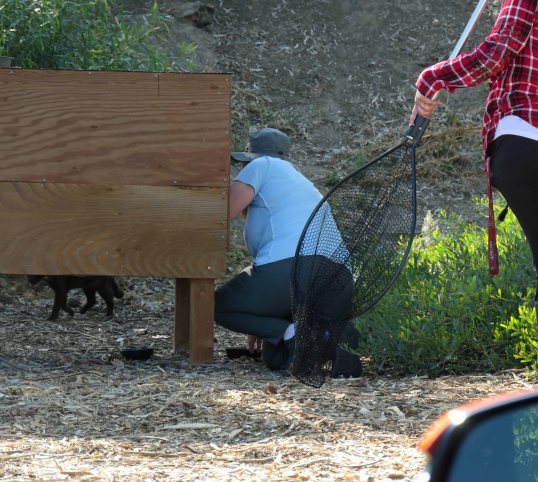 I threw bits of sardine Linda had prepared to bring him closer and he loved that.

He warily moved closer and closer until he decided to take a chance and snatch a big piece of the salmon/sardine repast Linda had put together. 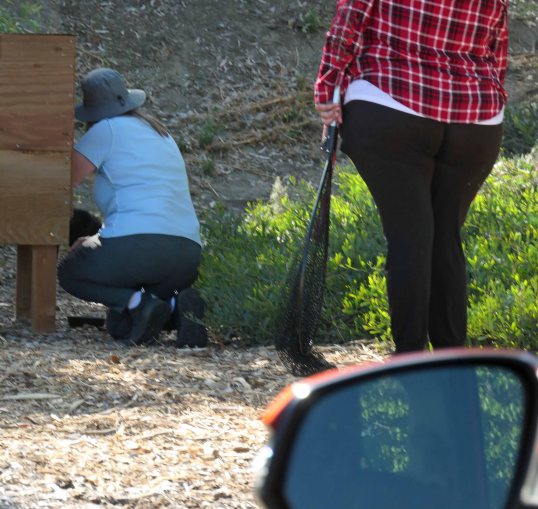 He sort of turned away from us as he ate it, and Angela was able to ever-so-slowly bring her net down, inch by inch by inch as he snatched bite after bite and I’m still talking in a low, soothing voice to him.

Angela was laser-focused the whole time. Now the net is so close, angled vertically with net hanging about six inches above the ground. Sam looked at it for a second but went back to his food. I thought that any second Angela was going to go for it, but she held off as she tilted the net so as to be almost horizontal to the ground over his body. I made a tiny shift in my kneeling position and he flinched; but I’m still talking, Sam’s still eating, now oblivious to her net.

And that’s what Angela was waiting for—for him to become immersed in his eating. Then BAM!!! The net hits the ground with Sammy inside!

I stepped down hard on the handle. Angela says, “Keep talking to him Janie.” She yells to Linda to bring the towel to put over the net, which Linda had already second-guessed her and was running towards us with it. Sam was thrashing but not as bad as a true feral cat might. She threw the towel over the net. We breathe for a second and exhale mightily and let out some godawful guttural laugh!!!

WE FINALLY CAN HELP SAM!!!

Sam’s trapped on the ground, netting and towel covering him. Linda brought the carrier, opening the top. Angela had pulled the netting underneath so as to enclose Sam in it, all the while keeping him pinned to the ground. Towel still on top. She instructed me to move with her, as she has the cat by the scruff and the net, and I’m holding the handle of the net. In one rapid movement we moved Sam and net over the carrier opening and Angela deposited Sam into it.

The sheer mixture of relief, exuberance, exhaustion and triumph hit all of us at the same time.

As you can imagine, we couldn’t have got him without Angela’s sacred net, particularly because Sam is “anti-trap”. That cat wouldn’t go near the trap no matter how many places we staged it, electronic gizmos, or bribes we offered. He was having none of it!

And the experience of seeing a cat netted was truly exciting!

The rest of the cats are well fed, happy and getting fat in their pastoral residence. All’s well in kitty cat kingdom.

UPDATE: Sam is now “Samantha”!!! “He” is a “she”!!! She will be released soon from the care of our county animal services and hopefully we can get her a dental for her stomatitis before we must release her back to our colony. 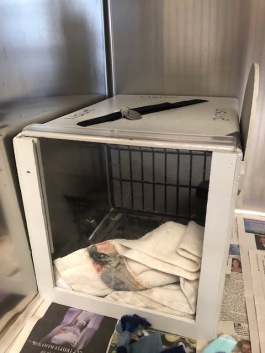 Her neck wound is from a bite. It became so infected and must have internalized, because what we saw as discharge from her eyes and nose was really pus from the internal abscess that was emerging from her olfactory passages.

25 thoughts on “The Story of Sam aka Samantha”