The Story Behind My Social Media Look

Since October 1 when I launched my Paw It Forward Commentathon and Blog Hop, a few of you have been curious to learn the “who” behind my new look.

There is a story actually…more than just one “who” and it all started with one of my first ever Paw It Forward actions.  It sometimes feels like I have been headed to this moment, with this social media look and this mission to Make A Difference almost from the beginning of my blog.

But, Mom L can tell this better than me so I am going to turn this blog post over to her.

Mom L: “Yes Nana, I’m coming. I was just trying to find some facts to share but I guess I hit the delete button once too often a year ago…LOL”

Hi everyone, Mom L here. I know several of Savannah’s readers have been guessing ‘who’ created the look Savvy now has branded across all her social media.  But I believe it took this paw blogging, Tweeting, Face Book animal rescue social media community to get us where we are now.

The image of the cat is actually Savannah herself. The image is from a very poor photo I took of her when I first started blogging…but I have always thought it represents Savannah’s persona…even today after she has made so much progress recovering from who knows just what trauma in her life. 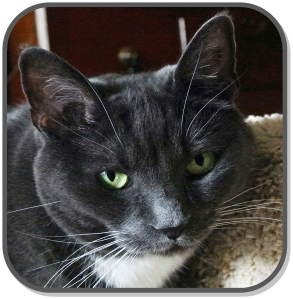 Her blog is sometimes fun and funny, but her story and reason for blogging has always been to give voices to those who don’t have social media as Savannah does; and to share her struggle with being an adult shelter rescue cat who is still afraid to explore like other cats; her curiosity is subdued because she is so anxious, cautious and it’s like she was never played with as a young cat and she is relearning how to play with abandon.

In 2012 I participated in probably my first or perhaps second blog auction ever. I don’t recall who the funds were going to help, but even before I thought of the phrase Paw It Forward had meaning for Savannah, there we were…bidding to win a hand painted portrait of Savannah to help animals in need.

We WON! The artist was none other that Barb Kowlik, Queen Penelope’s (Nellie) Mum…the talent behind  Cat From Hell. You can view the initial work Barb shared with me as she progressed HERE.

This is the color study Barb sent us to preview: 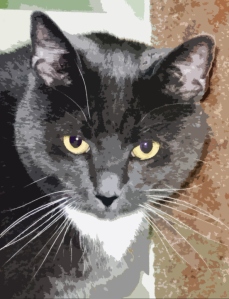 And the finished product…Savannah’s two portraits we purchased from Barb: 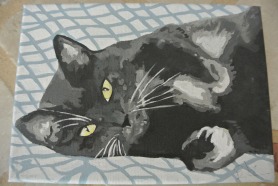 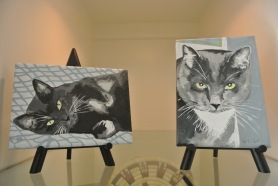 Both portraits at home

In 2013 I was getting ready for my first Blog Paws conference and learned that people had business cards for their blogs etc.  I was nonplussed as to what to do until I saw somewhere that Glogirly Design,, aka Debbie Glovatsky… could do business cards.  WOO HOO!!

I got right to Debbie and we kicked around some ideas, most of which were created using stock images to begin with which she then added some magic to and those images came out resembling Savannah. I liked one very much, but then thought…”I think I will send her the image Barb did for Savannah’s portrait, I just love it”.  So I did. I said to Debbie I am sure you can’t use this but I thought I would send it as I so love this look, it is Savvy’s persona.

Debbie was excited as she saw possibilities. But it would take some redrawing, illustration work etc. to make the image usable for creating business cards.

And then in my email I found this file from Debbie…

Dad P and I were both “gobsmacked”!!! We loved it!!  And off I went very proudly to Blog Paws.

Flash forward to this year, Summer of 2014.  I decided  Savannah’s Paw Tracks was at a point where Savannah and I needed to take a risk, step forward and try even more to truly become a voice for those animals who do not have access to social media the way we do.

I reached out again to Glogirly Design, aka Debbie Glovatsky, and asked “can you help me brand Savannah’s Paw Tracks across all her social media?”.  Of course I heard a very loud and confident ‘YES”.

And with Glogirly Design’s expertise and coaching we decided to have a launch event. I would never had tried this without the coaching and counsel from Debbie. And I had incredible writing and event coaching from Dash Kitten staff…meaning Marjorie Dawson, as well.  I tried hard to keep it under wraps so not many were aware of the changes to come.  I am sure I failed to thank all who listened to me, please know Savannah and I could never ever have made this event a success without all of you.

Every day every one of you Make A Difference in the lives of your own rescue companion animals and the lives of those awaiting rescue.

Savannah is honored to be called ‘furriend’ by you.  Hope you enjoyed learning the birth story of Savannah’s Paw Tracks social media branding.  And it all started when Savannah put a bid on a self portrait to help raise money to help a furriend…Paw It Forward!

peeEss…as you know Meoowz ResQ is the winner of Savannah’s commentathon donation. Savannah’s Paw Tracks will be making that donation in honor of the blogger who nominated them, Christy Paws and her furr siblings; sisters Fontana and Philly; brothers Echo and Ocean…and her human Miss Ava.

32 thoughts on “The Story Behind My Social Media Look”