Cats, Dogs, Coyotes and Wolves: A mysterious connection Part One

This blog post is important in particular to anyone in the USA who has indoor/outdoor cats, dogs or is a caretaker of feral cat populations.

It is important for our international readers as well because global ecosystems are endangered…and  humans are right at the top of the charts as owning causal responsibility.

I will paw this post over to Mom L because she has lots to share. Hope you will stick around and read the post and also come back for Parts Two and Three.

There is a direct link between being able to diminish the number of cats and small dogs being killed by coyotes and the survival and growth of all three wolf species in the USA.

The wolf is the top predator in the USA wilds. Bringing them back directly impacts the coyote population in the wild.

Fewer coyotes in the wild means their food sources will be more plentiful; then logical deduction suggests there will be fewer and fewer coyotes who will have to move into urban areas to feed on our cats who are allowed outside, and feral cat populations who have no protection as well as on small dogs who may be roaming loose or even in an enclosed yard. 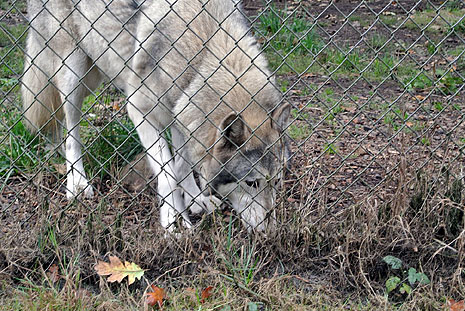 Mexican Gray Wolf (mostly found in Southwestern USA and Northern parts of Mexico…close to extinction in the wild);

We have long been committed in our family to supporting the reintroduction of the Gray wolf into parts of the Northern USA, specifically, the initial reintroduction in Yellowstone National Park in 1995-1996. Our belief was that they would contribute to returning  a lost balance in the ecosystem in this part of the USA.

Our trip to Yellowstone in the winter of 2006 offered these sightings of  5 wolf packs, among about 20 packs,  during our week long tour. One of the packs is shown close up on a week old kill…to caution anyone who might be bothered.

In just 10 years from 1996-2006, ecosystem balance, in many ways, had already begun. I have a link to a great report listed below. Suffice it to say, one very visible impact of bringing back the top predator in the ecosystem, the Gray Wolf, reduced the coyote population by 80%. The remaining coyotes are more leery of humans and are now hunting the small animals and rodents that bring balance in another way rather than preying on campsites, garbage and loose dogs brought in by tourists.

33 thoughts on “Cats, Dogs, Coyotes and Wolves: A mysterious connection Part One”