Well they were about two weeks old when we rescued them and they are now approximately five months old. For so long no one has wanted to adopt them in pairs—until this week!!!

Our two sisters, Laughing Samantha aka Sammie and Jessie James aka Jessie found their forever home!!

Sammie is the smallest for the gang, and the most adventurous. She loves to ride on Mom L’s shoulders.

Jessie is so regal and yet such a snuggle bug. She can do the Flying Squirrel acrobatic move like no other kitty except Momma Cat from The Cult of Otis. 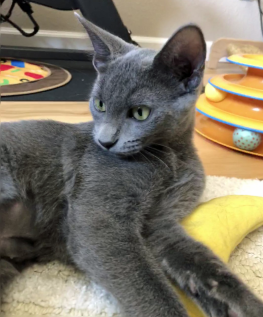 Both sisters are now creating bonds with Mr. James and his wee daughter Mistress Jaina. You can see that Laughing Samantha, aka Sammie had no problem getting up close and personal with Mr. James’ fluffy head of hair!! Sammie jumped right up and made herself at home on Mr. James’ shoulder. (we have tried to ‘smudge’ facial features out of respect for their new adopters). Both girls enjoyed a fun wand toy playtime with Mistress Jaina. 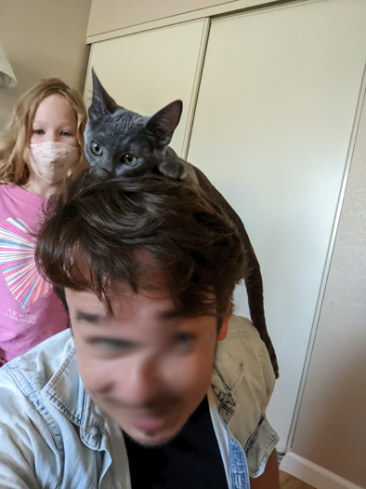 This was Mistress Jaina’s first time in her whole six years of life trying to pick up a kitty. And Jessie and Sammie were great teachers. Mistress Jaina was so kind and careful. All four of our fosters allowed her to pick them up multiple times!! 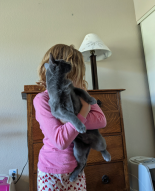 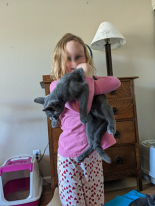 Now if only somewhere, out there, in the San Francisco Bay Area there are one or two families looking for cuddly, snuggly juvenile male cats, like our Domino and Butch, then this would be a purrfect Happy Tails Ending.

BUT—for now we are overjoyed to know that our foster sisters are gonna be living the good life forever with Mr. James and his daughter Mistress Jaina.

14 thoughts on “Happy tails ending for my two foster girls”