Happy Tails Endings Are the Best!

You are for sure going to totally enjoy a couple of happy tail ending rescue stories I have to share with you today.

Are you ready to do some Happy Dancing??

My former rescue shelter Kitty Corner recently sent out some Happy Tails Ending updates that I know you will want to hear about. This is what Miss Chrissy, the Adoption Manager for Kitty Corner told us:

“There were  two brothers who’d been bottle fed by a woman and lived in a topsoil yard for the first year of their life.  When customers complained about the “presents” Hank & Rocky would leave in their topsoil purchases (world’s biggest litter boxes), they were trapped and brought to Animal Services.  Each were adopted and both returned; one for having bitten and one for scratching (they adopted one to a 90-year-old woman who’d poke at the cat with her cane when he hid under the bed!) .Miss Sue, a volunteer at the county Animal Services hoped they could remain together.  She brought each over to Kitty Corner after their quarantine periods were done.

They didn’t hang out here together at all oddly, especially given their Happy Tails Ending.  A couple applied to adopt them both before an adoption event, and since this was their first cat, they ended up just deciding to adopt Rocky at the event. But they fell so in love with him and his awesome disposition that two months later, when they felt they could easily manage a second cat, they came back and adopted Hank. And now the two brothers are reunited and couldn’t be happier together.  Love times a million!”

“Hope you are doing well! Thompson and I just wanted to give you an update on the boys adjustment with living together. Chrissy, you have no idea. Saying they are best friends is an understatement. THEY LOVE EACH OTHER! I swear I will come home, and they are always snuggled up next to each other! I attached a couple of photos of them snuggled up together! At night when Thompson and I go to sleep, they are running wild all over the house playing with each other. Sometimes, we wake up, and all we hear is sprinting back and forth from them playing together with their toys.” 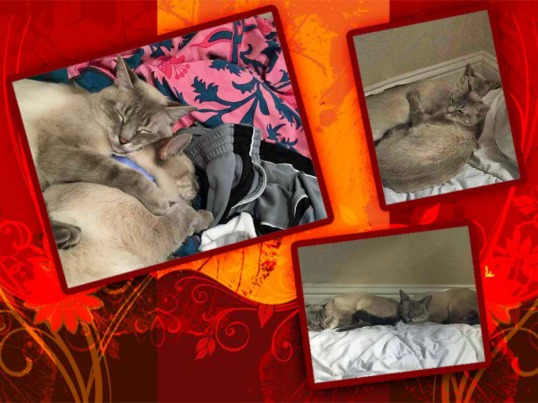 Next we had another update from Miss Chrissy about a sweet Moma kitty who Mom L actually was able to have a meet and greet with. She was barely a year old and pregnant, with SEVEN kittens! The people with whom she lived owner surrendered her and the kittens to the County Animal Shelter. Miss Chrissy was thrilled to scoop them all up and bring them to Kitty Corner.

All the kittens were adopted, but Snow White (the shelter named her that as she had 7 kittens MOL). Finally her day did come and her new guardians sent this update and photos of Sansa aka Snow White.

This is from Snow White’s mom, who’s renamed her Sansa.  “She’s doing great and is really warming up to their German Shepherd teenage dog, who’s super cat-savvy.”  Miss Chrissy has spoken with her a lot since adoption and she’s very happy with Snow White aka Sansa.

Isn’t she just the most gorgeous calico/tortie combo!

Hope you now have a great big smile on your faces and have started to do your Happy Dance. RESCUES ROCK!!!

Many more Happy Tails Endings are needed so please be sure to always SHARE SHARE SHARE when someone posts about a cat or dog in need of a home…let’s all do more Paw It Forward!

24 thoughts on “Happy Tails Endings Are the Best!”