I’m pleased so many enjoyed learning about how Mom L and her buddy Miss Jeanne trapped mom cat using her kittens as bait! Believe you me, they had a ton of coaching text messages to get them through it!! But now they can both say “been there, done that!!!”

Many of you asked if we were still trying to get the person who lied about being with a legit cat rescue named Kitty 911 (K911) East County. I don’t know if K911 is still trying, but Mom L quit ‘cuz that person wouldn’t ever return her calls once Mom L started asking if she could pick up the two kittens. We don’t know why this person chose to lie to the really nice man on Nextdoor who was asking for help. The person is self reporting to the man that they are being well cared for but then when Mom L talked with them asking them to foster mom cat and the other six kittens, they refused unless they got money for food and medical if needed. So makes us wonder if this person has the ability to care for the kittens long term and get them S/N and vaccinated and adopted. We worry. K911 did report this person by name and phone number to our county animal services. You can find the legit K911 and see all that they do on Facebook here.

These are the only two photos we have of the two kittens the person took. I think that blue thing is a warming disc, at least I sure hope it is. 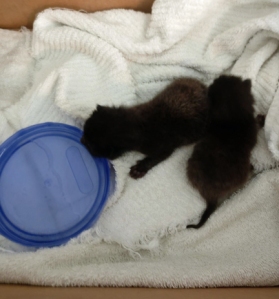 These were when they were likely less than 5 days old.

Sure would have been great if that person would have given them back to their mom cat. Just look how happy she is once she was reunited with her other six kittens! 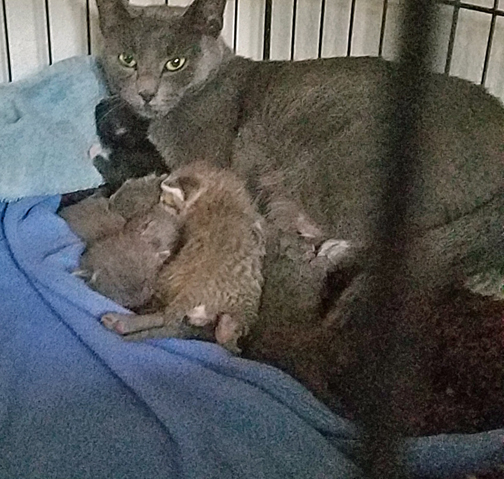 I have lots more to tell you about all the community cat rescue Mom L and Dad P have been doing. But one of those stories is gonna be a long one. Hope you all have the patience to read it in installments!!