Do you remember my  blog post a week or so ago about darling Koko? Another “friendly” colony cat Mom L collected to set on the path to adoption. If you recall, he was returned and things were not easy for Koko after being ignored by his adopter for two months before they returned him to the shelter.

Well, Dad P and Mom L were visiting him every other day at Pet Food Express where he was moved to by the shelter. A great location for him but he still languished and remained in hiding. The staff are all cat savvy and expert adoption counselors, but they began to fear he might need to go back to the shelter as he didn’t appear to be making progress. But they agreed to keep him another week. Thank Ceiling Cat they did!! Slowly Koko began to stick his head out of his cubby hiding spot.

He moved closer to the opening and was now keeping his eye open, not shut tight to close out the world.

So the last time Mom L and Dad P saw Koko, they were visiting him as usual. But as they approached the enclosure where he and Gemma were housed, they thought their eyes were playing tricks on them. There was Koko, out of his hiding place, walking tall and proud across a bench in his enclosure!!! Mom L was so stunned she forgot to even take a photo.

Now just what managed to get Koko to gain confidence enough to stroll around his enclosure?? Go on, what do you think happened? 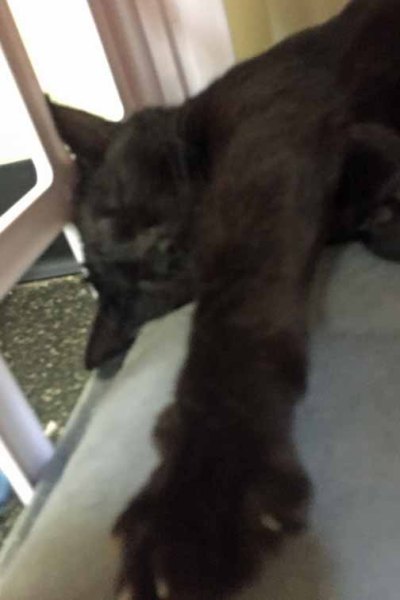 Ok, I’ll tell you. We all feared that as more and more kittens were being moved from the shelter to the location where Gemma and Koko were that people would really ignore them. They are after all adults and black.

Here is who gave Koko his mojo back!! KITTENS!!!! 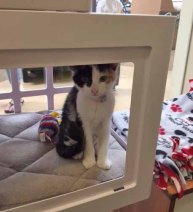 When the staff placed three kittens in the same enclosure with Koko and Gemma. Koko decided they needed a big brother to show them around! It was amazing! He had been out and about and even drew the attention of not one, not two but THREE potential adopters!

Mom L and Dad P went in to visit him and lo and behold, he PLAYED with a feather toy with Mom L! The video is only 17 seconds and worth the watch!

Koko even allowed Mom L to take him onto her lap and he didn’t try to leave! What a change. 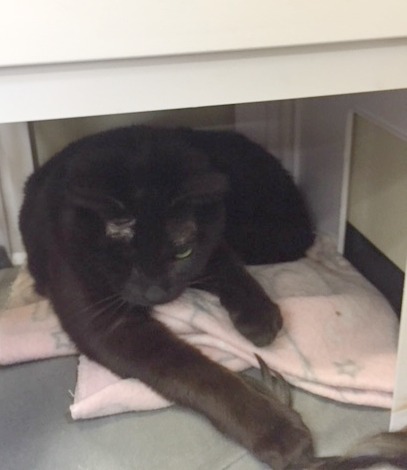 I got you little feather!

Koko was adopted about two hours after Mom L and Dad P left him that day. A nice woman who knows cats fell in love with Koko and the staff did a thorough vetting of her before they all agreed that Koko had indeed found his forever home.

Please wish Koko well in his new home and life. I hope you enjoy learning about the colony cats we help with my Paw It Forward Project—Project Delta View Cats. Let me hear in comments if you wanna learn more about the colony and the other cats who have had successful adoptions.