Do you remember my Paw It Forward Project to help get Pumpkin, an abandoned adult cat, away from living on a street corner?

Mom L did an “owner surrender” of Pumpkin to our wonderful Contra Costa Animal Services shelter. There were no fees and if he did not adjust to living in the shelter Mom L could pull him back and return him to the home on his street corner. Apparently from what Mom L learned from his feeder Miss Kandi, he has been living on the street corner for over fifteen months after being abandoned by tenants in the apartments on that corner. Miss Kandi was more the willing to continue to feed and care for Pumpkin if he found the animal shelter too much to bear.

Here is where he lived for all those months, in summer heat and last winter’s heavy rains.

This is the other side of “Pumpkin’s Corner”.

He lived under the plants and on the redwood bark chips

All those bark chips made it so hard for Pumpkin to keep his lovely white socks clean. He ate behind an electrical box and watched longingly as the world passed him by on his corner. 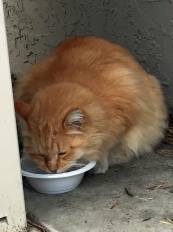 Well times changed for Pumpkin as soon as he arrived at the shelter.

They shaved off lots of his fur mattes and he found he could groom himself better without living in that redwood bark chip. And he also realized he liked being held.

Pumpkin was immediately placed in the shelter free roaming Kitty Korner where he had not problem with the other cats. That led the San Francisco SPCA to pull him within less than a week!! The SF SPCA has large free roaming cat rooms and they knew Pumpkin was going to fit right in.

Mom L doesn’t know “where” Pumpkin’s forever home is. BUT—Mom L never even saw him go up on their website! Rumor has it that it is likely that someone who works at the SF SPCA saw Pumpkin and adopted him for their very own!!

I like to think that Pumpkin is living in some snazzy San Francisco penthouse and dining on caviar served to him in Waterford crystal!!

Now don’t ya think this deserves to be titled a “Happy Tails Ending”??? Let me know what you think in comments!!