Compassion for a Senior Feral Cat

I asked Savannah to allow me to tell a story about a senior feral cat I recently met. There is a community cat colony within walking distance of our home. Fortunately, a friend who is a skilled cat trapper has already trapped almost all the cats for spay, neuter. I will tell you more about this colony in another post.

My time with you today is to share the story of a senior feral cat from this colony as I know it. I have only known him for about two months. There are about thirty five cats in this colony which has been in this location for over fifteen years. I walked around one day by myself and I saw a cat on one of the hillsides. I got closer because I couldn’t believe what I was seeing. 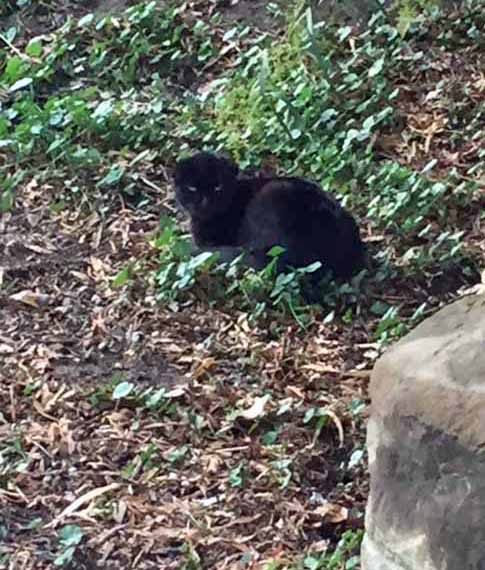 And yet what I discovered was that they were collapsed forward and inward. Once the feeder arrived I asked about this black cat, with no name. She said he was about three to four years old in 2006 when they took him to a vet about his ears being damaged. That would make him about fifteen to sixteen years old now. They were told he had cancer, but was otherwise fine. They determined to bring him back to his colony and watch his health. His ears grew worse and worse and yet here he was twelve years later, alive. But was he truly “well”.

I asked if I could trap him to get him to see a Vet at the Community Concern 4 Cats feline clinic for community cats. You see, I was finally able to view his ears up close while he was eating.

The earless black cat is behind the bench so I used the bench to lean over him, and his ears were very raw, torn, infected and yes, bleeding. The tree above the bench is the one I would often find this kitty sleeping in when I arrived to help feed or just visit. I believe that some of the other cats were beginning to sense his weakness and perhaps took advantage of it. He would always greet me with a soft “meow” then come down from his tree bed. 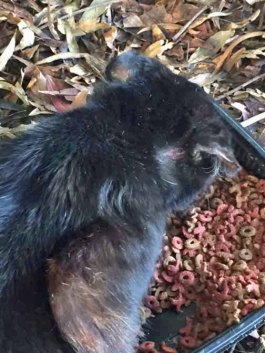 He loved roasted chicken so the feeder brought some on the day I would try to trap him. For some reason that day, none of the other cats arrived for feeding time—except this one. I put the cooked chicken in the set trap and placed it near him. He did not even run. He did love his chicken! He followed that chicken trail right onto the trap trigger plate and I had him!

We kept him in our garage over night for his early morning appointment next day. We knew he was at least twelve to fifteen years old. We gave him food and water but removed the food dish—which was empty—as we knew he needed to fast over night. Interestingly, he meowed to us softly a few times when we would check on him. He never hissed and only growled once when he was trapped—who wouldn’t growl at that!!

I doubt he was ever a totally feral cat as they do not typically “meow  talk” to humans.

I had already talked with the feeders to get their permission to have this senior fellow euthanized if his ears and general health could not be effectively treated. We all agreed on this.

However, talking about euthanizing a senior feral who has never bothered anyone, simply lived his life in his colony with a view, is easier than doing it.

I knew he had lived a good long life with feeders and park visitors and maintenance crew who all treat the cats with respect and caring. His view of the Northern California Delta was pretty amazing and free!

Fog coming up the delta from San Francisco bay

Nonetheless, I was wishing I had found him when he was younger—perhaps I could have helped socialize him or at least find what his food allergies were. On and on went my self questioning.

Dad P and I could not take him to the clinic without giving him a name. Because he was wise and had not had a true home, we named him Strider. That is a character in JRR Tolkien’s Lord of the Rings trilogy. We believe his name suited him very well with his coat of dark shiny black fur that allowed him to blend in with shadows just like the “Strider” in the books.

I was allowed in the exam room, after they sedated him, to join the Vet in her exam. Before the Vet began to go over what she observed about his condition and health, she asked me to keep in mind his “quality of life”.

His ears were the apparently the result of year upon year of likely food allergies, not cancer. This could be temporarily treated but he would be right back in a month —needing to be trapped again and sedated to give him more antibiotics and treatment for his ears, and this would go on month after  month. For those of you who feed large feral colonies, you know it is next to impossible to manage a cat with such a severe food allergy.

And then the Vet informed me that her even greater concern for his quality of life was his mouth. She opened it wide so I could see all the infected gums and teeth that were the worst I have ever seen. And not many left either. The clinic did not have dental cleaning equipment and even if they did, she said he would have to go through multiple sedation procedures and then not likely that all his dental infections would resolve.

She left the decision to me, which I truly appreciated. I was alone with Strider and I stroked his pretty shiny black fur—even having lived outdoors for at least fifteen to sixteen years, his fur was in lovely condition. His feeders fed him well!

And so I stroked Strider, told him I loved him as the Vet and I helped him on his painless way to The Bridge. The loving feeders of this colony miss seeing Strider as do I. But Strider needed us to show compassion for him and his declining lack of quality of life.

I can’t say enough positive thanks to the Vet and staff at the Community Concern 4 Cats clinic. They were kind to me and ever so gentle with Strider. His body will be cremated and his ashes spread at a local kitty cemetery. That seemed a loving place for Strider, don’t you think?

36 thoughts on “Compassion for a Senior Feral Cat”