You guys are sooooo observant! I thought there were only FIVE babies in that photo when Mom L showed me. And then I realized that one of those little heads could NOT be connected to the body I thought unless that kitten was a contortionist!! MOL!! 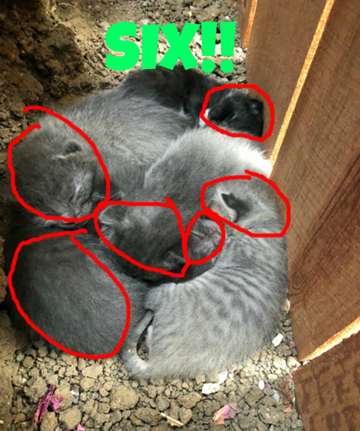 For those of you in the USA who have access to and use the app called Nextdoor.com, you will recognize this message Mom L and I saw as a common one.

Kittens in my backyard

While watering my backyard tonight a adult cat jumped on the fence out of the bushes I kept watering I didn’t think much of it and then I heard the little screeching of young kittens they are probably no more than a week old I hope momma comes back does anybody have any advice on what I should do they are soaking wet because I sprayed my plants I put a little blanket on them.

This compassionate person checked through the night to make sure the kittens were safe from raccoons. When he checked at first light there were only two! He then cared for them until someone contacted him at night saying they were with a cat rescue and would take the two kittens to bottle feed.

Dad P and Mom L reached out to our neighbor who lives just across the water from us, and let him know we would try to find the kittens Momma moved and Momma herself. Mom L wrote up a flyer and she, Dad P and the neighbor distributed it around his part of our community to let residents know we were searching for a mom cat and babies.

Next day Mom L received a call and the person had heard kittens mewing at night. The next day same thing and Mom L hopped in her car and there they were!! 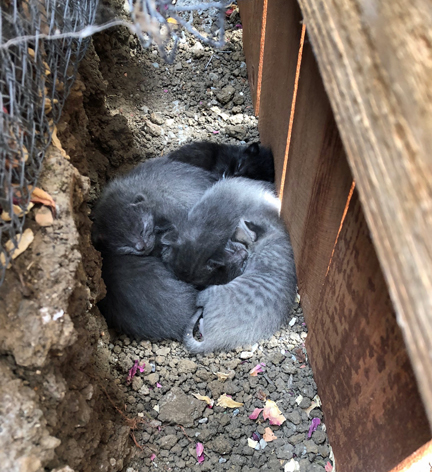 All tucked in nice and safe. Now what to do to trap Mom cat? Mom L tried for a three days to catch the mom cat, but she knew what a trap was all about. And then the dreaded news that rain was in the forecast for Tuesday this week. We had to get those babies out of that dirt trench before the rain.  Mom L reached out to several trapper pals and one was able to come to our assistance.

Miss Jeanne and Mom L had neither one ever tried to trap a mom cat using her kittens as the “bait” by themselves, but they had expert coaches and they set up this trap. 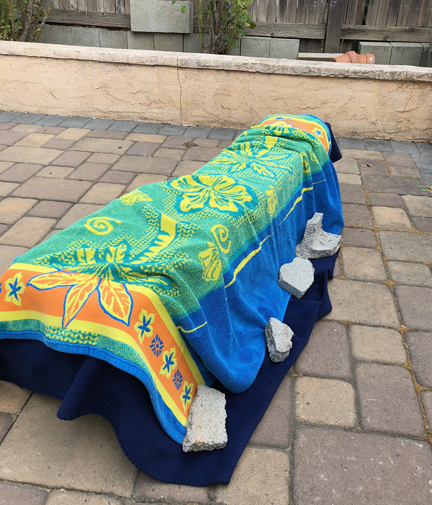 Kittens in the carrier in back and set trap in front

Miss Jeanne stayed watching that trap set-up while Mom L dashed off to a doctor’s appointment. And then the MIRACLE CALL!!

WE HAVE MOMMA CAT!!!

Mom L rushed over and sure enough, there was Mom Cat, trying to get as close as she could to her six kittens.

Beautiful, isn’t she? So Mom Cat and her remaining six kittens have been reunited as of Tuesday this week. And that’s enough for a Thankful Thursday post for sure, don’t ya think??!!! Follow this link to join lots of other wonderful Thankful Thursday posts over at my pals’ Brian’s Home blog hop. 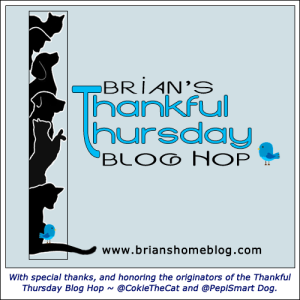 I am so very very thankful that we had another successful Paw It Forward project! The first two kittens who were taken in by a rescue person have not been reunited with their siblings. That is another story for another blog post as to why. For now, we believe they are safe and cared for, but we do worry a bit.

Let me know in comments if you enjoyed learning about our most recent cat rescue work.