Archive for the tag “trust”

I think Foster Pipsqueak aka Pip, must have known he was gonna be needing to get used to “packing his bags” when he decided to nap next to Dad P’s bag with Katie in it.

For those who don’t recall how Pip came to live in my castle, here’s a brief recap of his capture as a feral kitten, never touched by human hands until about 12 weeks old.

Mom L knew right away that Pip had something wrong with his right eye and she hoped that she could manage to administer eye ointment by burrito wrapping him. Well not only did that work out just fine, Pip started to purr up a storm while Mom L was holding him after administering his medication! Hours later he rolled on his side and back to let Mom L pet his tummy and he purred even more. In a day he was climbing onto Mom L’s chest and snuggling with her. He loved giving her nose kisses!

Pip and Katie became best friends and they played like crazy all over the house. They especially liked to share their food with each other.

Pip and Katie would eat out of the same dish, then one would move to the other dish and was soon followed by whoever was left at the first dish. They were so silly.

Pip grew into such a handsome boy in the almost three months he lived in my castle. He had sleek short soft fur at first. 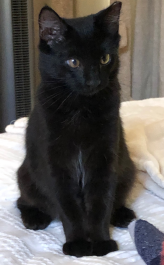 But in the last month with us Pip started to fill out and puff out!! He was spending a lot of time growing toe tufts, ear tufts, a long floofy tail and floofy tummy. Why he even started to grow out his pants on his back hind legs. 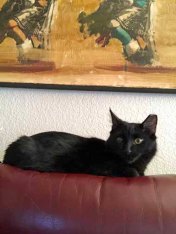 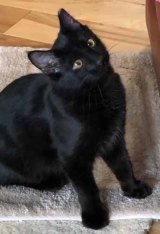 One of his favorite wand toys had a furry thingy with little leather straps and he so liked to catch it and try to carry it away with him!!

Mom L promoted Pip all over the San Francisco bay area for at least six weeks and no one inquired about him. Our partners at Community Concern For Cats (CC4C) helped promote Pip through their social media and the few inquiries that showed up were just not right for our sweet boy.

Then the last Saturday in September, a young couple asked to meet Pip at CC4C’s adoption event at Petco. Their emails were so detailed and informative about why they were interested in Pip. They lost their senior cat to cancer a few months ago and their three year old boy cat was lonely for another cat to hang out with. Mom L really liked how the couple talked about the way their cared for their cats and they only  want a kitty to be indoors.

Well, Pip worked his magic when they met him—meaning he didn’t do a thing except allow them to pet his luxurious furs. He never gave any eye contact because at Petco there are too many loud people looking at the kitties. The couple and Mom L agreed that if their resident cat, Barsik, didn’t accept Pip, then he would come back to my castle.

Long story short, Barsik really likes Pip! They play together and hang out together just like long lost buddies. And Miss Anastasia was hoping for a kitty that would enjoy having her hold it and cuddle it and Pip is doing all that. Barsik is more of a cat’s cat, he loves his pets but not being cuddled or picked up. So Pip will handle that part for the both of them!! Here are photos of Pip in his forever home. 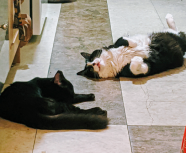 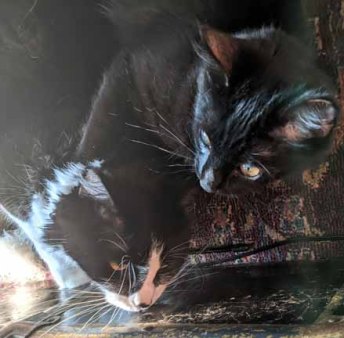 He clearly loves his new humans already. He gazes in their eyes with trust. 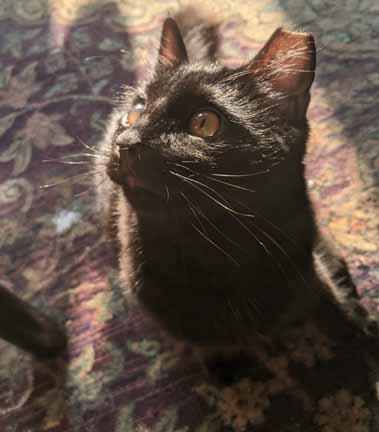 Pip is in the best forever home any kitten could ask for. Mom L and Dad P and Katie all miss him, but I am glad he isn’t here anymore. His liveliness frightened me and made me nervous enough that I stopped eating much out of concern he would sneak up behind me. You see I am close to completely deaf. As soon as Pip was off with his forever humans, I started to eat well again and took up my place in Mom L’s office which had been Pip’s bed time space for too long.

Isn’t he a handsome boy?

I have important news about my recent progress

I know I may appear to be a bit grumpy in the photo, but rest easy, I am actually very excited. But you see Mom L caught me just settling in for my afternoon nap on this wonderful vintage quilt she carefully folded in hopes I would not find it a comfy bed.

HAH!! Wrong was she!!! That sun puddle had my name on it and the quilt was folded to a size that matched my gray furs and full figure purrfectly. I agreed to chat with her about the title I wanted for this blog post and I approved her edits to my two AMAZING videos which prove that I have just recently made incredible, phenomenal progress is my recovery from early trauma—before I found my perfect castle and family of course. 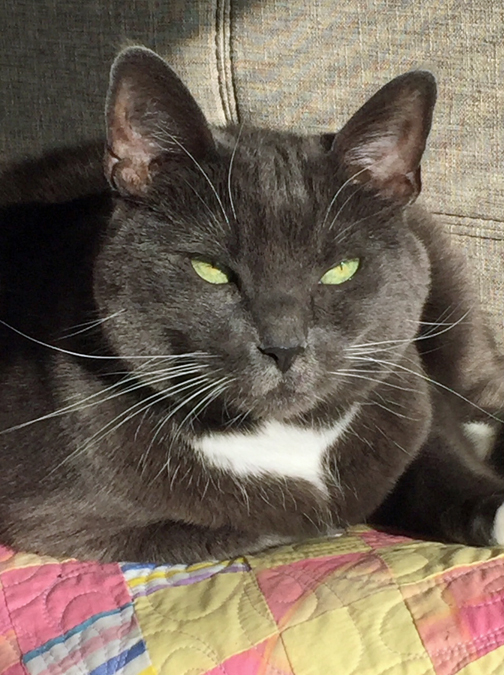 Ugh! Mom L kept on talking to the point I began to think I needed to get some sunglasses!! Why she couldn’t just wait until later I have no idea.

So about my amazing progress report! Mom L and Dad P went away to the mountains for a whole week. They looked and looked for new pet sitters for me because my new one was getting married. She didn’t seem to want to come stay with me and TKS—something about wanting to go with her new husband on some stoopid honeymoon! Whatever!!

So we actually required two pet sitters to cover a one week period. They are both registered vet techs and they split up the week. They are very much sought after as you can imagine.

So the second day with us, the first pet sitter, Miss Kat (no pun, none whatsoever!) was off work and stayed home to get to know us. She recognized my invitation to approach me instantly!! I was on my beloved stairs and asking for attention and play!!

And if THAT isn’t enough to shock your socks, check out this next video where I actually talk to her a couple of times and I PURRED out loud for her!! TURN YOUR SOUND UP LOUD so’s you can hear me give her a couple of meows and lots of purrs toward the last ten to fifteen seconds.

Don’t you think this is remarkable progress for me!! I really liked Miss Kat and hope she can come back. Mom L got a bit teary eyed to see me open up so much to a stranger. Guess Miss Kat must know some cat language, right?

This is another report on my continuing progress—some of which is beginning to confuse The Kid Sage. You see not everything in my relationship with Dad P is exactly as it was when she first came to live in our special loving, caring home.

I’ve already told about my progress in getting closer to, and trusting more, Dad P. You can check out my progress reports with him here, here and here, which is a very early report on my progress with allowing Dad P to feed me in the first six months of my adoption. If you haven’t been following me since April 2012 then you might wanna be sure to check that one out.

Now for my recent confidence which has caused TKS some confusion.

First you need to know that Mom L always sits on the couch with me at night to watch TV and Dad P always sits in his chair and TKS gets to join him.

WELL! Was TKS ever shocked and confused the other night when Dad P did something different and SO DID I!! 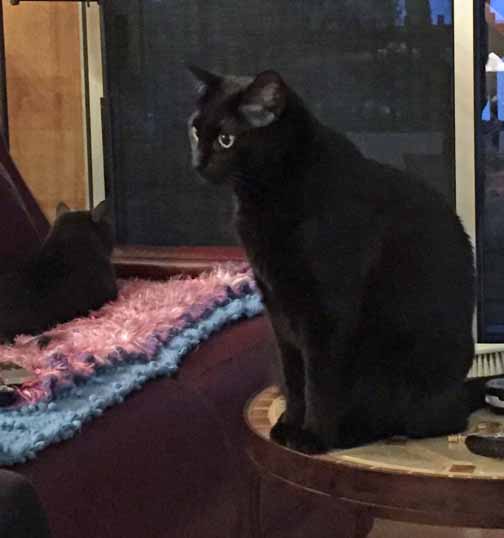 And why the heck is Nana still staying on the couch without Mom L??

And now you can see why I was staying still while Dad P settles into Mom L’s place on the couch.

Ahhh —Dad P you give such nice warm scritches

Give me a shout out in comments if you think I am progressing faster as I get older. I’m doin’ a study for my meowmoirs.